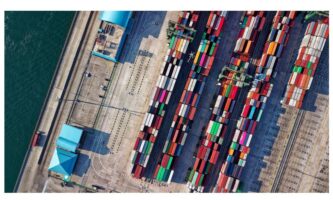 Recent images of the vast amount of emptied boxes strewn along the Union Pacific railroad line in Los Angeles County garnered national attention and highlights an unintended consequence of the supply chain debacle. The port backlogs have led to track congestion leaving transported goods at rest and making it an easy target for criminal activity. Southern California is a global center for transporting cargo and traverses thousands of miles of track throughout cities and counties at all hours of the day. Thieves are eyeing idle trains and breaking into containers filled with electronics, home goods, and other packaged valuable products.

According to CargoNet, a company that monitors cargo theft, “a train at rest is a train at risk.” California topped the list of states most targeted by thieves, CargoNet data showed — followed by Texas and Florida. In 2020, cargo thefts losses were $68 million and in 2019 they were $49 million, and the pace of theft is expected to continue through 2022.

Under federal law, railroad companies can procure their own police force to protect their trains. However, budget cuts and a loss of workforce from COVID-19 contribute to the problem. Union Pacific has stated that it will increase the number of special agents, utilize more drones, install specialized fencing and trespass detection systems in order to protect its property and employees.

On January 20, 2022, Governor Newsom joined CalTrans workers cleaning up the trash on the rail-line. He also announced task force expansion to fight theft at stores in addition to holding the organized criminals responsible for their actions. The Governor’s plan includes $18 million dollars to establish a unit in the California Attorney General’s office charged with investigating and prosecuting organized retail theft across the state.

The shortage of truck drivers in the U.S. has also contributed to supply chain issues during the pandemic. Experienced drivers are retiring. Long hours and uncomfortable working conditions are not appealing to younger people entering the workforce. The average weekly earnings for long-distance drivers have increased about 21 percent since the start of 2019, according to the Bureau of Labor Statistics. In 2020, commercial truck drivers had a median wage of $47,130. Trucking companies are looking to increase compensation to its drivers. To pay for those increases, trucking companies are raising their rates. Those higher rates contribute to steeper costs for retailers, and then are passed on to consumers and increasing prices at stores.

Explicitly, the FREIGHT Act would augment government oversight of transportation operations, minimize barriers for stakeholders to address unlawful shipping conduct, restructure truck driver certification, and encourage the use of new technologies for efficiency.

The $1 trillion infrastructure relieve program could also help mitigate the shortage of truck drivers. The legislation includes a pilot program that would allow commercial truck drivers as young as 18 to drive across state lines (after completing probationary hours). In most states, people under 21 can receive a commercial driver’s license, but federal regulations restrict them from driving interstate routes.

While some supply-chain bottlenecks may subside after the pandemic, it’s clear that what might not appear to be an opportunity at first glance, may be key to new innovation. The problems created under the conditions of the past 24 months are ripe for helping us rethink standard operating procedures and embrace new solutions, more innately resistant to supply chain bottleneck.